SKU:
#GARRETT-T1
Condition:
Refurbished
Availability:
Usually Ships Within 1-2 Weeks
Shipping:
Calculated at Checkout
We are international shipping friendly!  Click here, tell us what you want and get a prompt and personalized shipping quote. This includes Canada!

THIS IS THE EASY WAY TO DO A TURBO 1 SWAP ON YOUR TURBO DODGE!
Complete rebuilt turbo Dodge Garrett TO3 Turbo 1 style turbocharger with a complete EGR system. This is a professionally rebuilt and balanced original Chrysler style flange Garrett turbocharger that was used on 1984-1987 turbo Dodge cars with the 'log' style intake manifold.  This includes turbo Daytona, Omni, Laser, Charger, New Yorker and any other turbo cars built during this period EXCEPT 86 GLHS, 87 GLHS and Shelby cars with T2/TII style turbochargers.

This unit features the complete rebuilt turbocharger assembly as well as the complete EGR system including the EGR pipe, EGR valve, and 2.25" swing valve with EGR fittings.  The advantage of buying a Turbo 1 style turbo with the EGR system already in place is that you will not have to try to remove the old EGR system from your old turbocharger to swap it over to your replacement turbocharger.  This is typically not at all 'easy' and often results in broken off bolts and/or a broken EGR pipe. It's all been done for you so that all you have to do is basically unbolt your old Garrett Turbo 1 from the exhaust manifold and bolt on this replacement.  Not having to deal with the EGR system can save hours and hours of time and potentially additional expense trying to recover from a failed effort.  It's a total pain to swap the EGR system over successfully, so we've done it for you!

FEATURES OF THIS TURBOCHARGER

SPECS OF THIS TURBO CHARGER

*EGR TRANSDUCER PICTURED IS NOT INCLUDED WITH THIS TURBOCHARGER 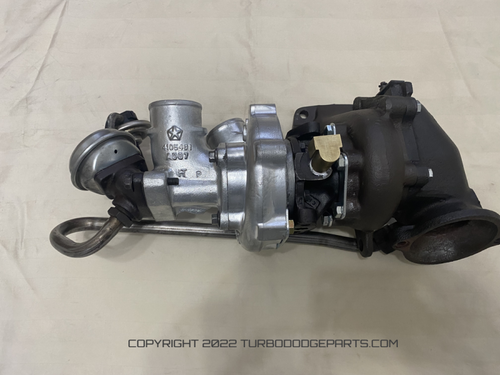